At the School of Art and Architecture (SAA), we share goals of innovation in learning through a focus on a socially relevant education in Planning and Architecture. This also allows us to position ourselves internationally. We aim to contribute with architects who are sensitive, articulate and confident with a strong ethical awareness of their positive role in culture and society.

The pedagogic and research emphases of the School include: 'heritage', 'sustainability', 'art and aesthetics' with a directed but open ‘hands-on learning’. Building upon these, we hope to develop research and make a mark on architectural and planning pedagogy at the global level. Expansion in the Masters programmes (2017) in Architecture and Planning was already aimed to bridge the gap between Bachelor’s and Doctoral degree programmes.

Upgrading research skills in the country and developing intensive faculty training programmes helps us extend our pedagogic output whilst infrastructure has been upgraded with state-of-the-art studios and workshops. Expanding the library with an online database of books, references, national & international periodicals and journals are some critical steps for the way ahead that the school has heavily invested in.

SAA is also in the process of positioning itself as a resource centre in the region, providing capacity building, data management and training opportunities for professionals in the field. We have conducted several urban interventions with our students using our idea of Gurgaon as a Living Lab for innovative strategies. The Degree Show 2018 showcased the best of the final year deliverables of all the degree programmes at School of Art and Architecture. On display were the awarded Theses and Dissertations of the undergraduate and postgraduate programmes. This was attended by our eminent Alumni and Architects and was an important interface between the students and the industry providing Sushant students an excellent networking opportunity.

In the near future, we aim to establish a permanent gallery and archive Centre of Modern Indian Architects. Work on the first SAA International Journal of Architecture: Veranda has already begun and the first edition will be launched early 2019 during our global carnival week of iPAC, International Planning and Architecture Conclave.

Through these endeavours and developments, we envision SSAA as the think tank of innovative disciplinary discourses that are ethical, responsible, inclusive, socially effective, and global yet rooted within our context.

This Booklet Series showcases a range of important work that we have been doing at SAA. There are three categories of booklets: Master Strokes of our post graduate programmes, Heritage Matters which focuses on the our lost and found heritage, (In)Fusion Series that presents works which have come together as amalgamations of processes and ideas, the Milestone Series that documents outcomes of our workshops and conferences and the Manthan Series based on the thematic brainstorming workshops with leading experts in the field. 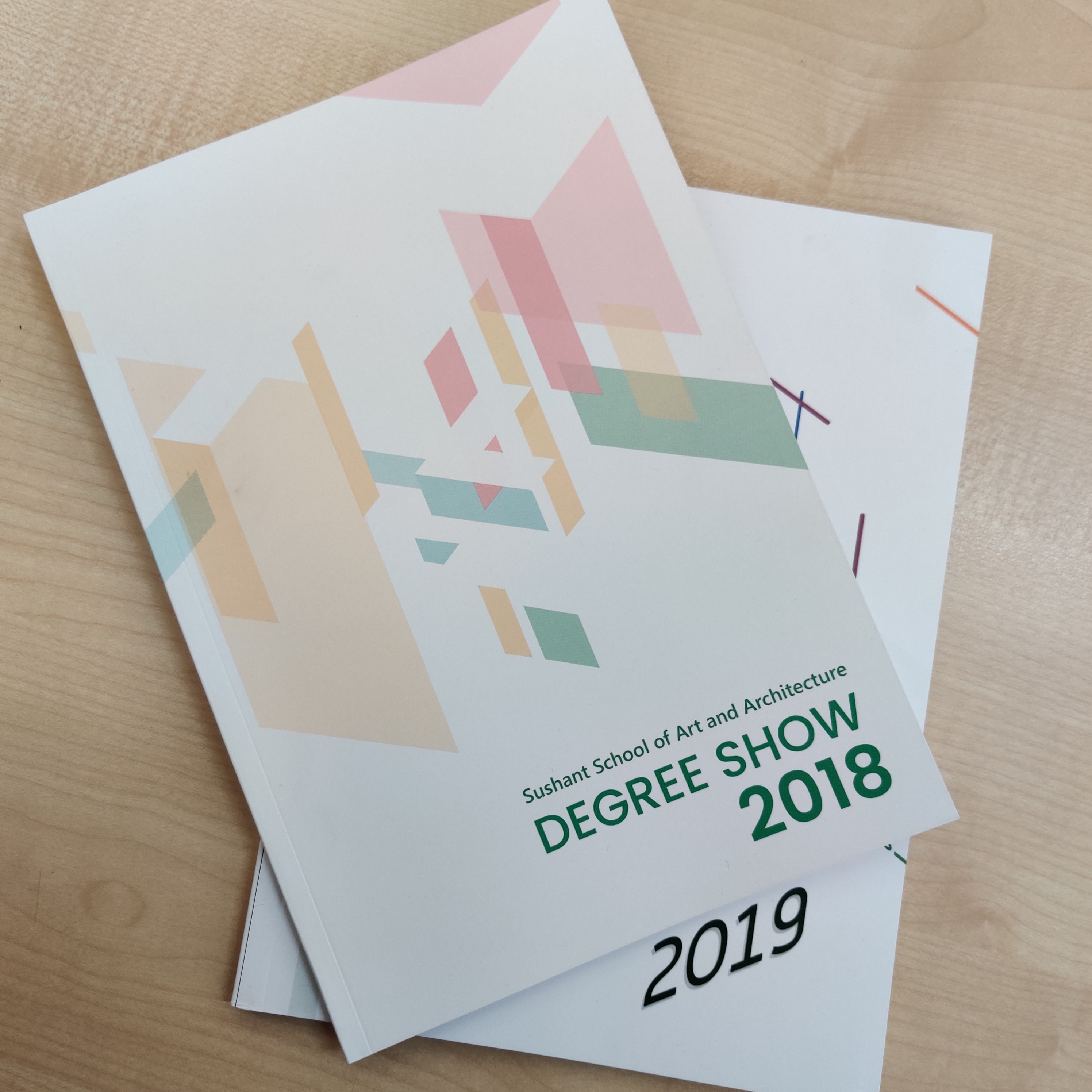 Smart Interventions: Under the broad idea of the series, ‘Smart Interventions’ coalesces work done in the MArch (UD) and MPlan as triggers for defining the nature of ‘smart’ within the on-going national Smart City agenda.

Inclusive Urbanity: The work on ‘Inclusive Urbanity’, done in the MArch (UD) and MArch (LA) programmes of SAA, provides grounds for experimentation of various approaches for more participatory and socially-embedded solutions.

Urban Extensions: This work in the MArch (UD) programme, takes a critical look at the fragmentation and defragmentation of expansions of Indian cities and their resultant urbanity. 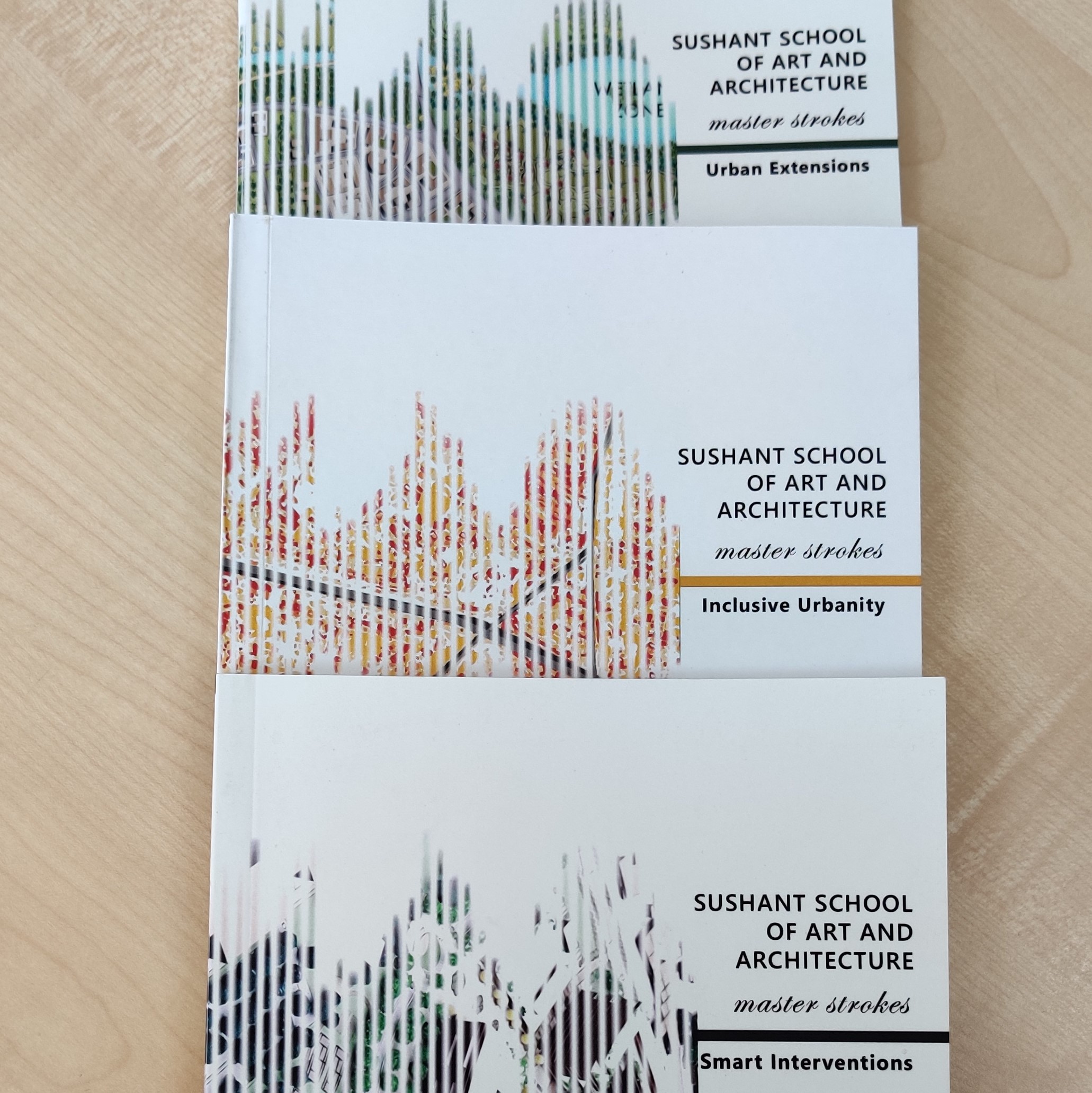 The Bawdi Challenge: This is based on a project that hinged itself on creating public awareness of the value of our immediate and intimate heritage. Designed as a 100-day journey, followed through in the form of studio exercises as a part of the MArch (BH) Studios and BArch Elective Studio programmes, the project attempted to bring together varied stakeholders and custodians of our heritage through its public outreach approach.

Rakhigarhi – 3 perspectives | 3 scales: In the news recently for the discovery of a 4,500-year-old skeleton, Rakhigarhi in Haryana has made the leap from being just another ‘ramshackle village’ with a Harrappan antecedence to a ‘live’ archaeological site rife with stories and layers of the past. In this feature, titled ‘Rakhigarhi – 3 perspectives | 3 scales’, we try to capture interventions proposed by BArch students through 3 different perspectives – in the 2nd Year Design Studio titled ‘Lost and living cities of Rakhigarhi’, in a 4th Year Elective titled ‘Advanced Adaptive Reuse’ as well as in a collaborative workshop with INTACH-Haryana Chapter and IFT- Institute of Tourism Studies, Macau. 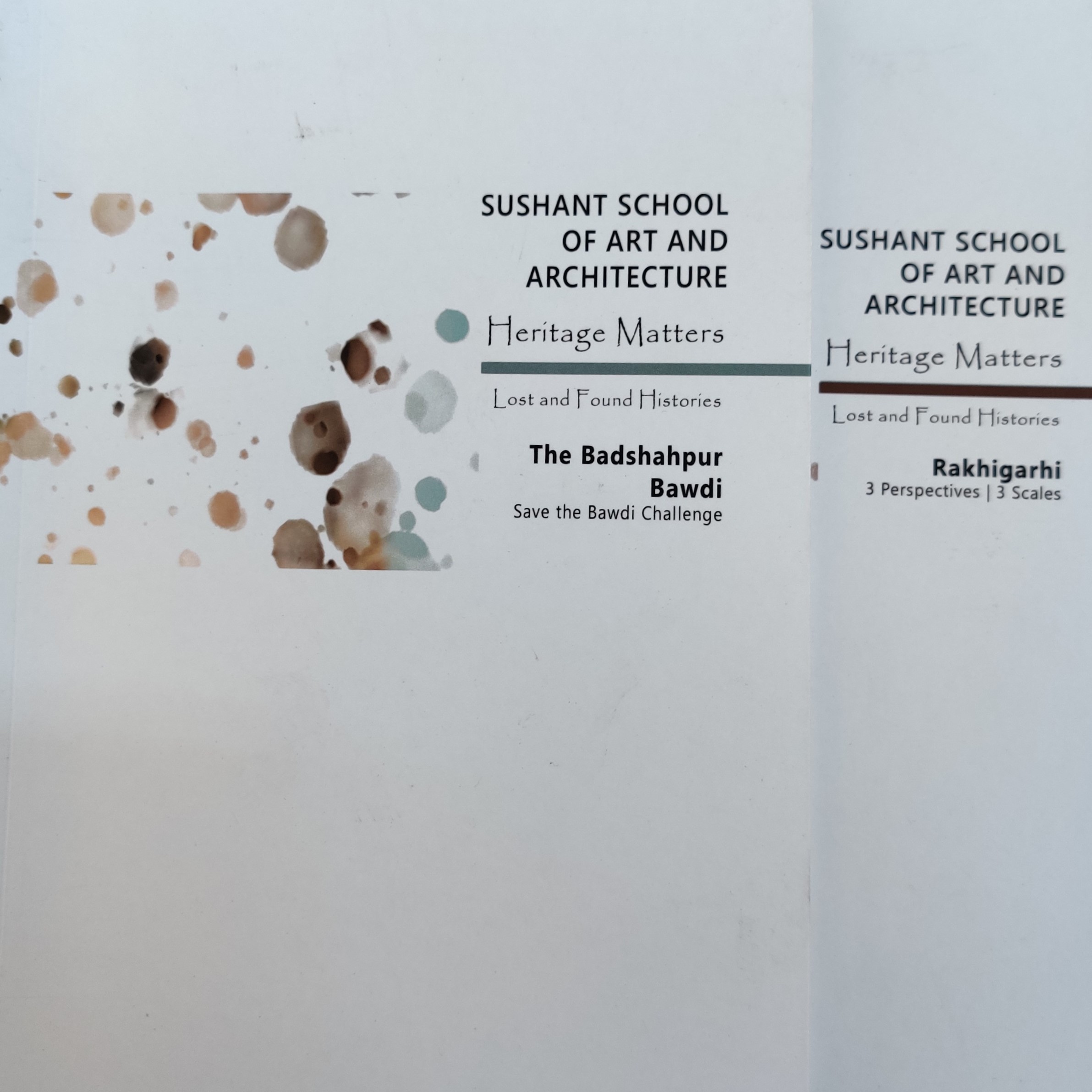 I-city – My city | Idea city: Engaging with your city is a prerogative of the citizen. When the citizen is an architect or an architectural thinker, the prerogative becomes a requisite. This requisite revolves not only around the vocalization of needs but also around the articulation of resolutions. In this publication, titled ‘I-City - My city | Idea city’, we take on the onus as architects-citizens to become the vessels of engagement with ideas and with our cities. 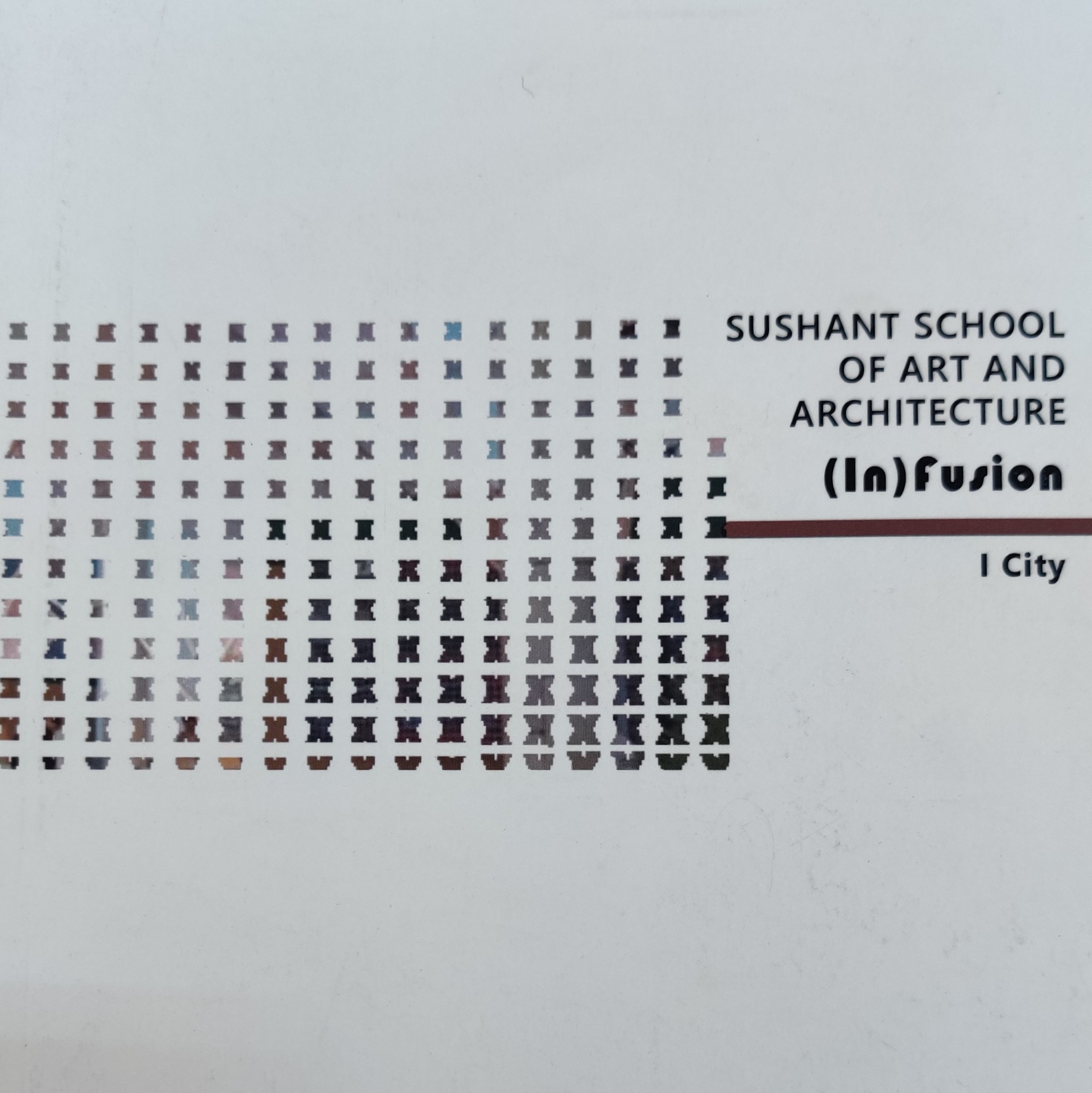 Gaze… a beginning: This is a compilation of various exhibitions, memorial lectures, etc. already held or slated to be held at SAA in the ongoing academic session. The events include JKC memorial lectures by industry stalwarts as well as exhibits of works of renowned architectural artists and sophists. 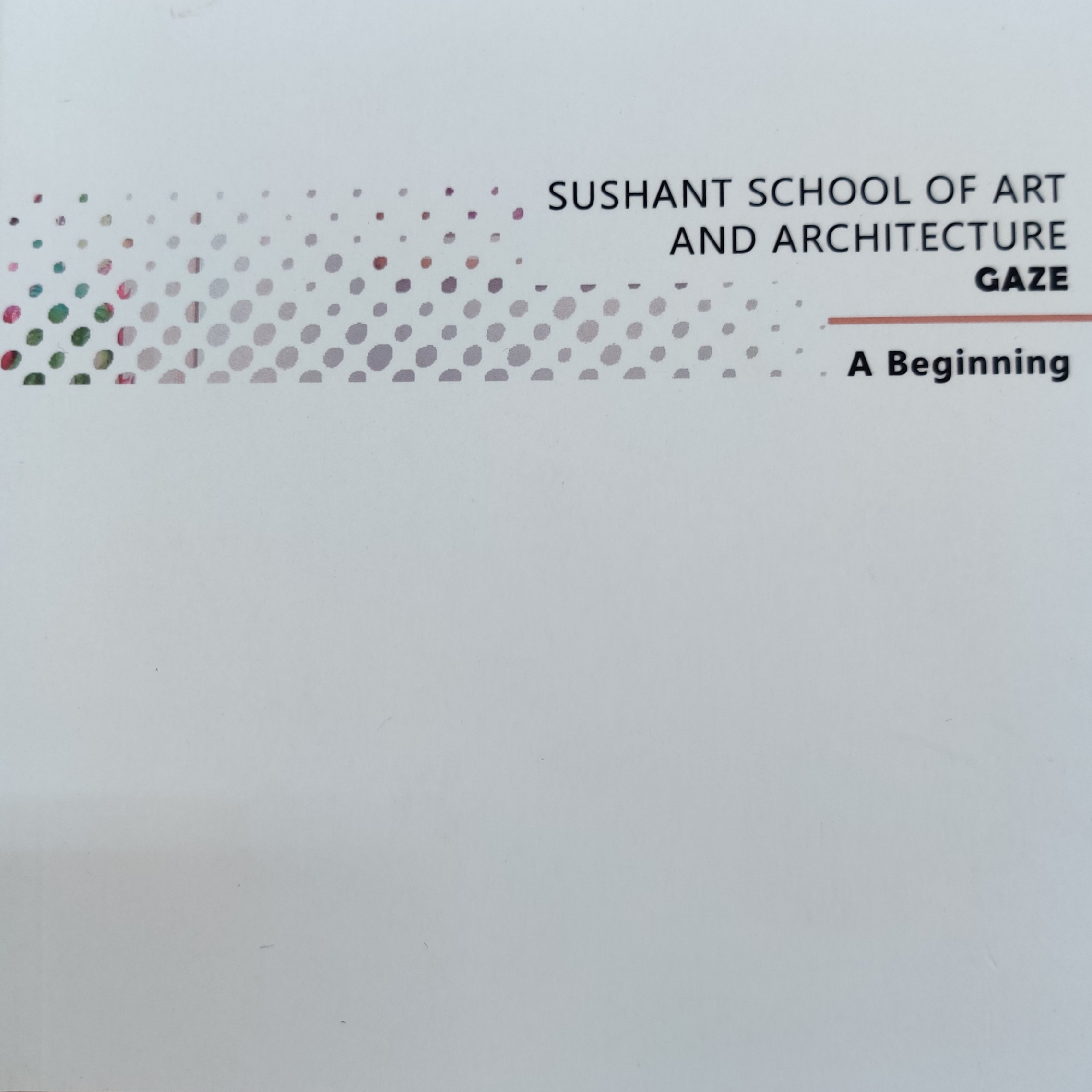 FabFeb 2018: This is a compendium of ideas, thoughts and perspectives. It attempts to situate SAA’s globally-informed connect with society, education, the built environment, industry, art and culture. In this publication we construct networks of ideas, linkages, intent, values and ethics and common societal agendas. 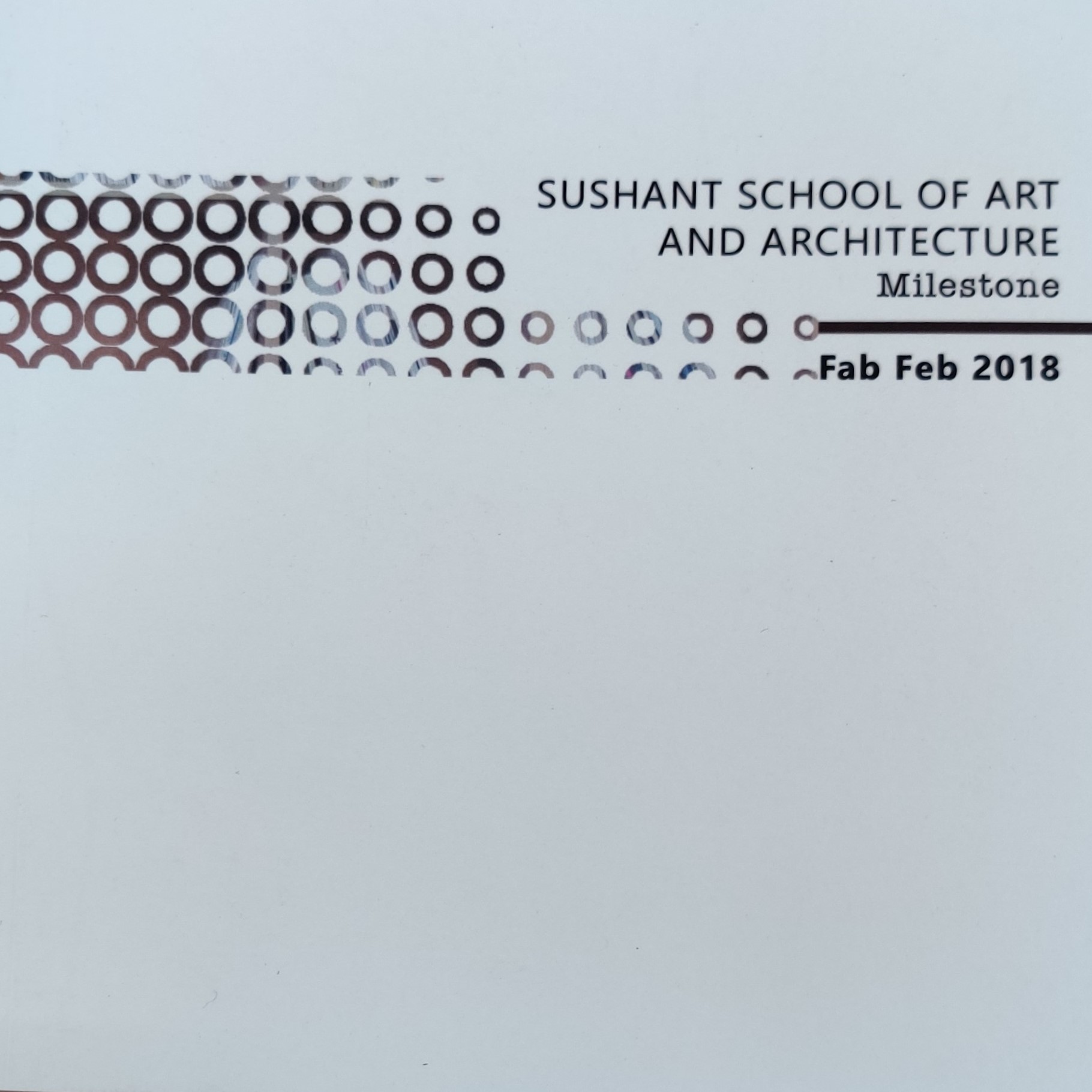 Built Heritage: The first Manthan programme, titled ‘Round Table Discussion on Built Heritage’ was to enable the extension of discourses around built heritage in an interdisciplinary manner. In addition to being trigger points for further academic enquiry, the key takeaways and inputs from academic and industry experts in heritage and associated fields have directly nourished our Masters in Architecture (Built Heritage) programme. In this publication, we bring together these ideas and focus on the ways by which the programme has attempted to plug the gaps in the industry through its pedagogy. 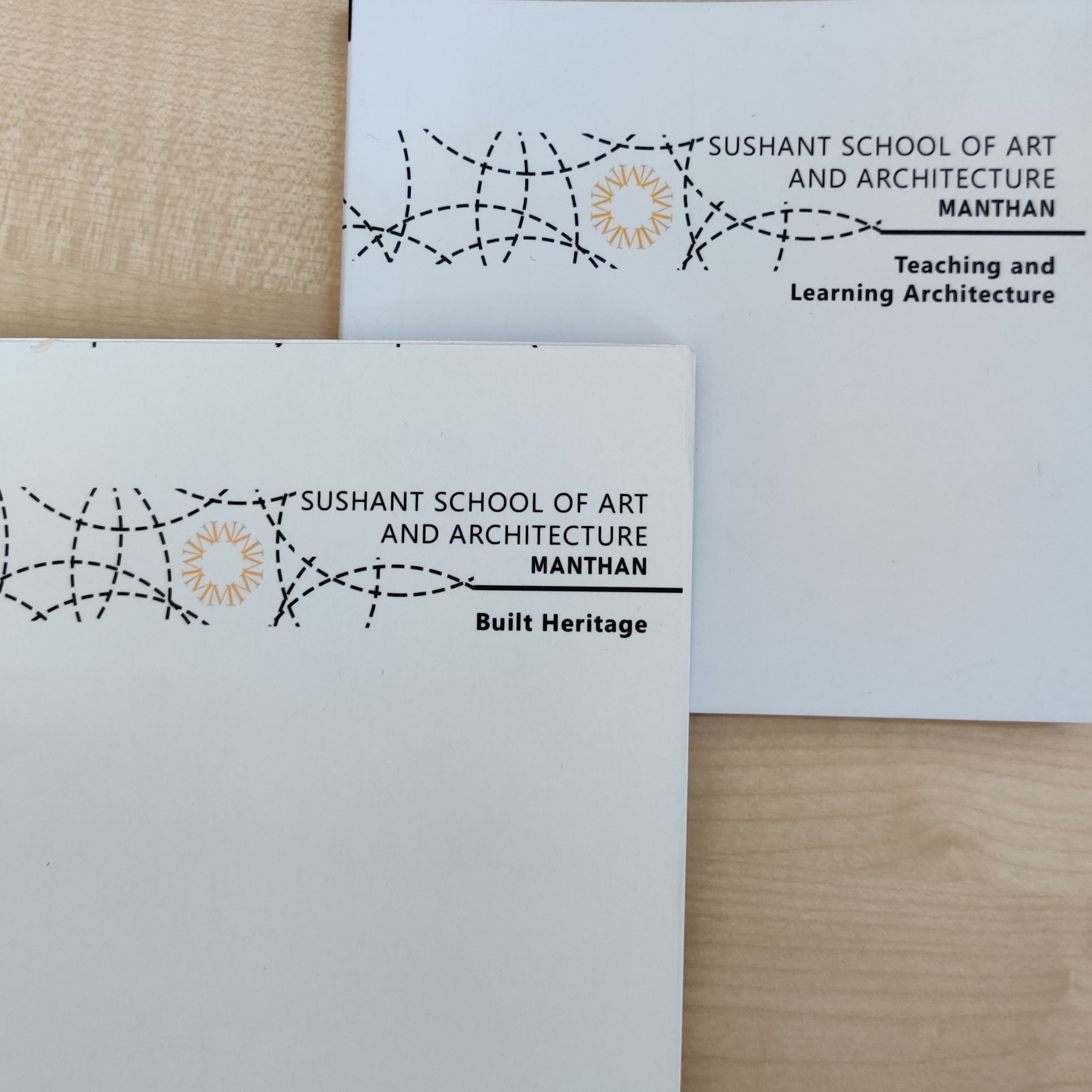 An Indo-Portuguese word dating back to the 18th Century, Veranda resonates in Hindi and Urdu with baraṇḍā “roofed gallery,” Marathi varãḍ, varãḍā “parapet,” and echoes back to Sanskrit varaṇḍaka: “mound of earth, rampart separating two fighting elephants.” Veranda: is the inaugural interdisciplinary journal of Architecture, Planning, Art and Design published by School of Art and Architecture, Sushant University. A hybrid journal of texts, essays, papers, critical commentaries and reviews, it explores a new writing and research on architecture where connections to urbanism, planning and pedagogy re-think text and image. From the rich varied content of the inaugural edition Veranda: (colon) makes a case for hybridity aiming to present dialogues in architecture always about to happen. This is a journal-in-flux responding to current but changing issues, in Gurgaon, India, and beyond. With a distinctive graphic identity and layout, the journal appeals to both international and Indian readers, re-assessing language, topic, theme and image. Something of the moment yet also academic, something respecting the pull of tradition and heritage but situated in the contemporary, even “speculative globalism’ of current India. Veranda: defines its own difference and appeal to language (image and text) by including the silent and uncertain issues as yet not spoken about. 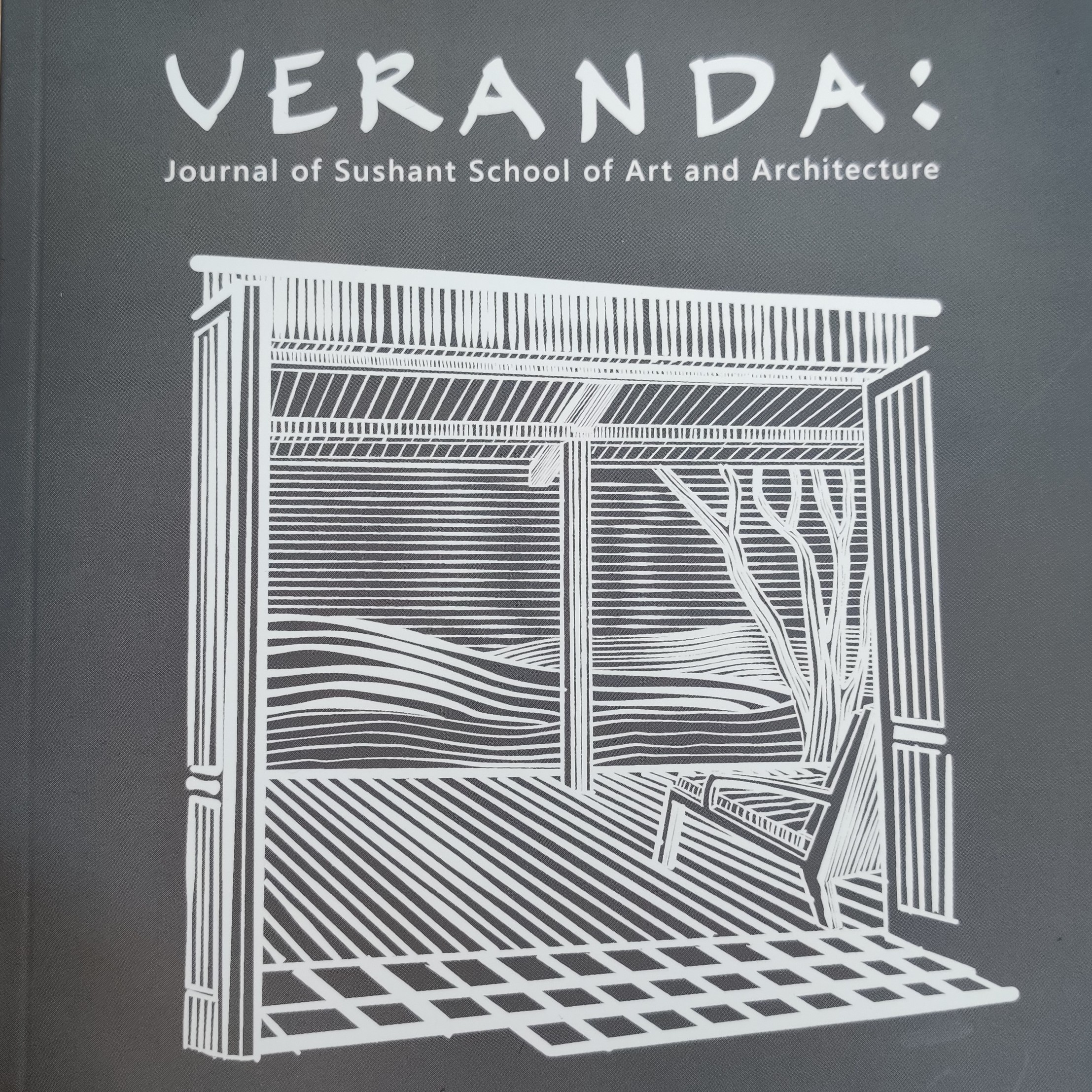 School of Art and Architecture