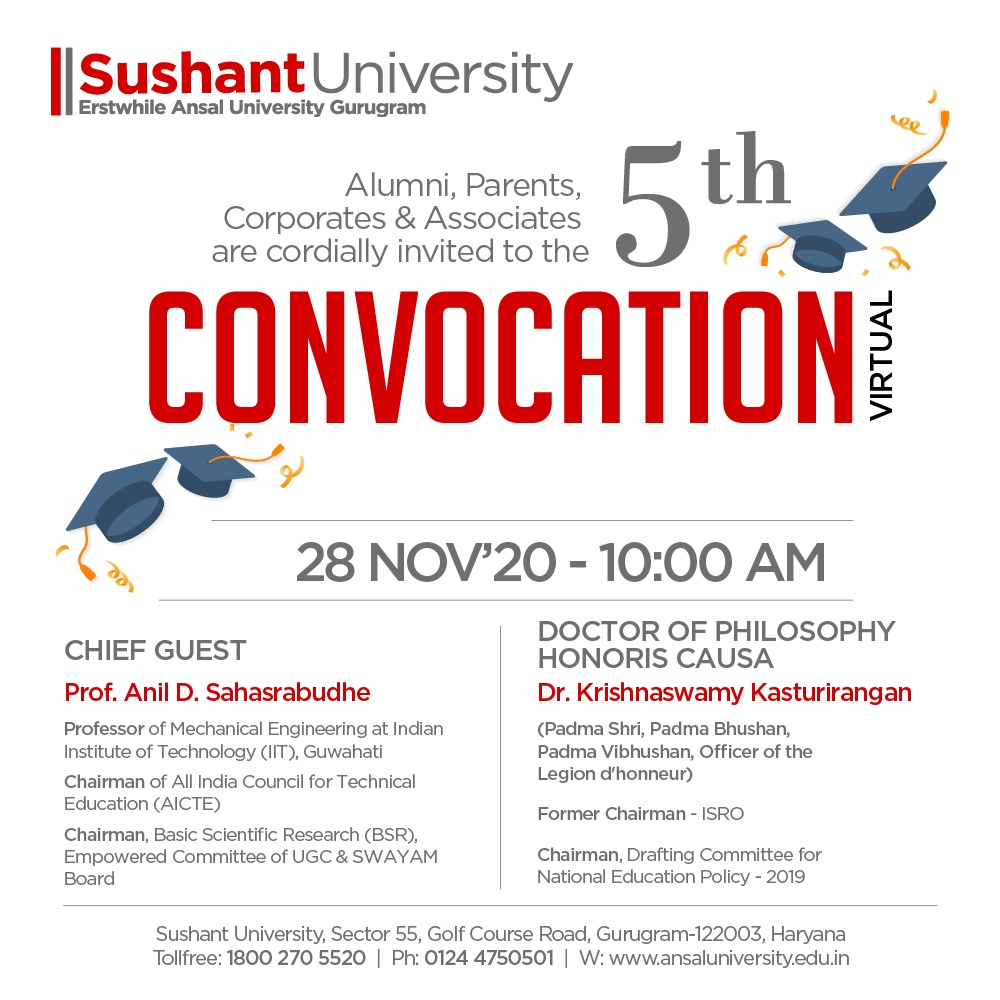 Sushant University, Gurugram with full honour confers upon Hon’ble Dr. Krishnaswamy Kasturirangan the degree of Doctor of Philosophy Honoris Causa. Dr Krishnaswamy Kasturirangan completed his Bachelor of Science with Honours and Master of Science in Physics from Bombay University and received his Doctorate in Experimental High Energy Astronomy in 1971 while working at the Physical Research Laboratory, Ahmedabad. He is a vivid researcher in the field of astrophysics, space science and technology and holds an eclectic experience in the formulation of scientific policies. Dr Kasturirangan worked with the Indian Space Research Organisation (ISRO) for over a period of nearly 35 years of which nearly 10 years as its Chairman from 1994-2003. He served as a Member, Upper House of the Indian Parliament, Rajya Sabha (2003-2009) and concurrently the Director of National Institute of Advanced Studies, Bangalore. He also served as a Member of the erstwhile Planning Commission from 2009 to 2014. Dr Kasturirangan was also entrusted with task of heading the Karnataka Knowledge Commission (Karnataka Jnana Aayoga) as its Chairman. More recently (July 2017-December 2018), he was assigned by the present Central Government, to serve as the Chairman of the Committee entrusted with drafting the new National Education Policy. Dr Kasturirangan presently is the Chairman, Governing Board, Inter-University Centre for Astronomy and Astrophysics (IUCAA), Pune; Chancellor, Central University of Rajasthan; Chairperson, NIIT University, Neemrana; Member, Atomic Energy Commission; Emeritus Professor at NIAS, Bangalore, and Honorary Distinguished Advisor, ISRO.

The contribution of Dr. Kasturirangan is par excellence being the Fellow of all the four major science and engineering academies of India. He is also a Member of the International Astronomical Union, Fellow of The World Academy of Sciences (TWAS), Honorary Fellow of the Cardiff University, UK and Academician of the Pontifical Academy of Sciences, Vatican City. To add to his recognition, Dr. Kasturirangan is the only Indian to be conferred the Honorary Membership of the International Academy of Astronautics.

Dr Kasturirangan was the first to occupy the Satish Dhawan Chair of Engineering Eminence instituted by Indian National Academy of Engineering (INAE) from 2015 to 2017. He has been the Chairman, Board of Governors, Indian Institute of Technology, Chennai (2000-2005), Chairman, Council of Indian Institute of Science (IISc), Bangalore (2004-2015), President, Court of IISc (2015-18), Chancellor, Jawaharlal Nehru University, New Delhi (2012-17), and the Chairman, Council of Raman Research Institute (RRI), Bangalore (2000-2016). A trailblazer in scientific and policy research, Dr Kasturirangan won several awards: Shanti Swarup Bhatnagar Award in Engineering (1981), Aryabhata Medal by Indian National Science Academy (2000), Rathindra Puraskar (2002) of Visva Bharati, Shantiniketan, Aryabhata Award of Astronautical Society of India (2003), Brock Medal of International Society of Photogrammetry and Remote Sensing, (2004), Allan D Emil Memorial Award of the International Astronautical Federation (2004), Lifetime Achievement Award of Asia-Pacific Satellite communications Council, Singapore (2005), Theodore Von Karman Award by International Academy of Astronautics (2007), Lifetime Achievement Award of ISRO (2008), and Desikottam Award (2013) of Visva Bharati, Shantiniketan. He has been conferred Honorary Doctorates from 25 Universities/Research institutions across the world. Dr Kasturirangan is the recipient of numerous Civilian awards at the State, National and International level. He has been awarded with the highest civilian honours Padma Shri (1982), Padma Bhushan (1992) and Padma Vibhushan (2000) by the President of India and Award of ‘Officer of the Legion d’honneur’ (2002) by the President of the French Republic, France, the Rajyotsava Prashasthi (2014) conferred by Government of Karnataka.

Recognizing your deep commitment to the cause of educational transformation and the extraordinary attainments of vision and intellect, Sushant University takes pride and feel honoured to confer upon Hon’ble Dr. Krishnaswamy Kasturirangan the degree of Doctor of Philosophy in Science Honoris Causa. 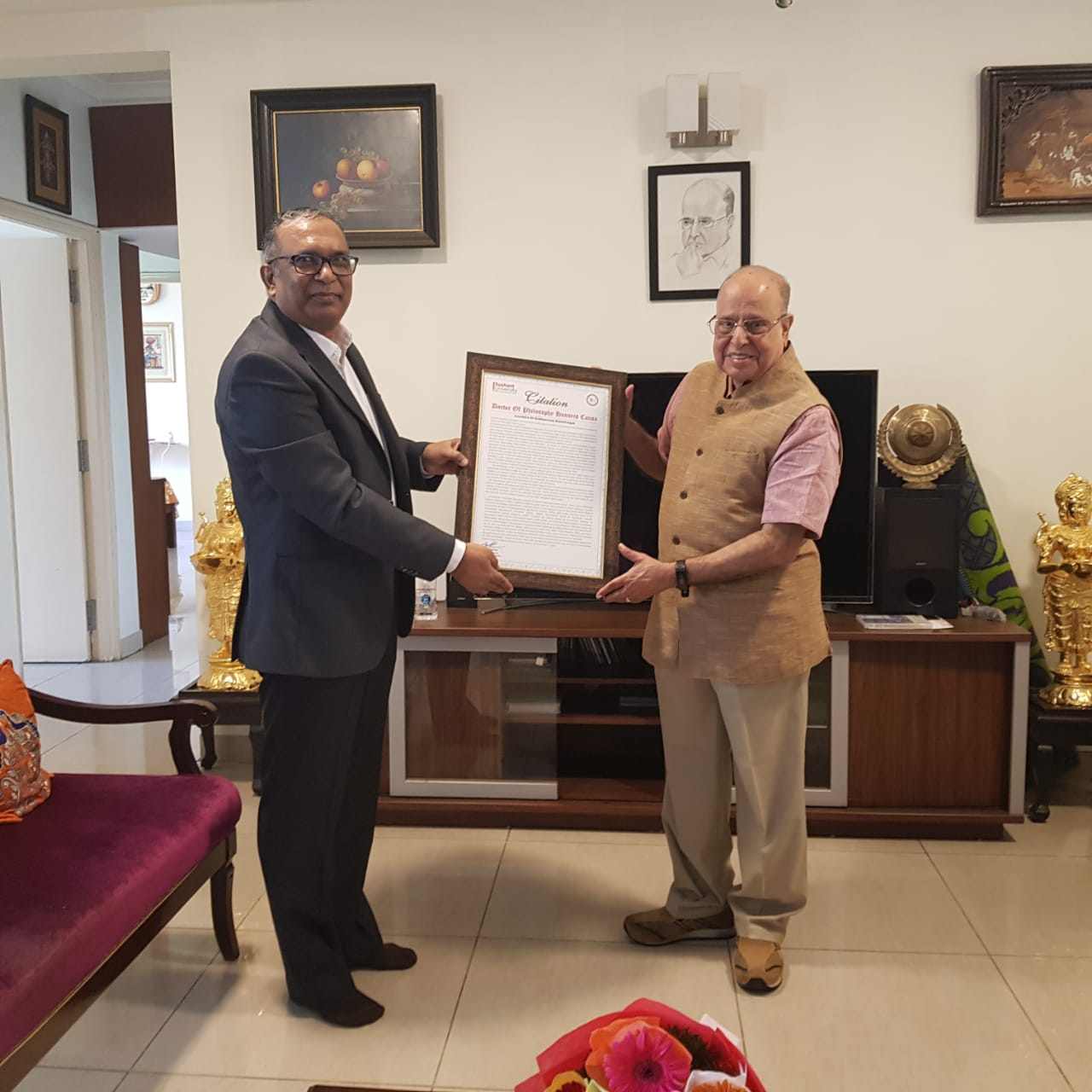 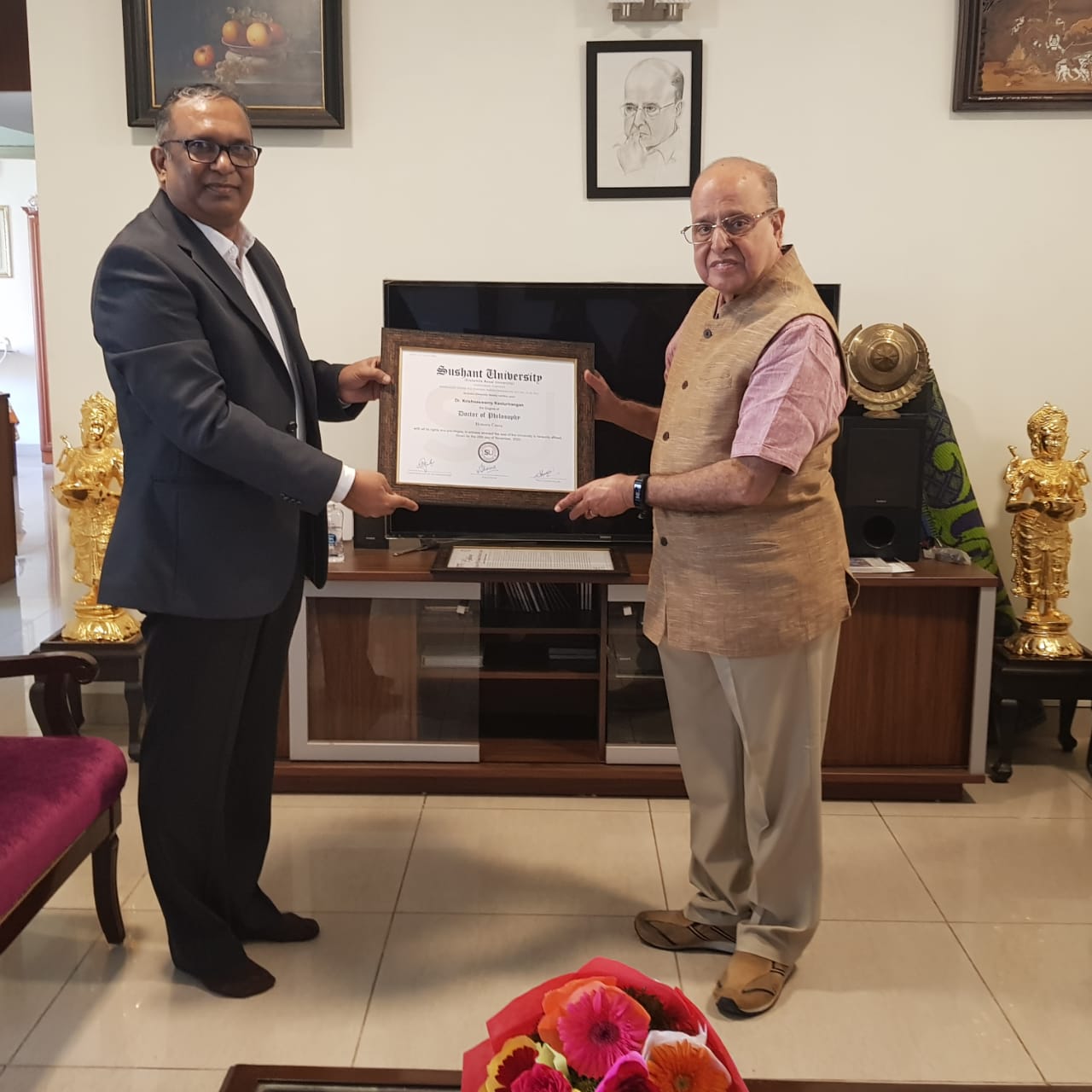 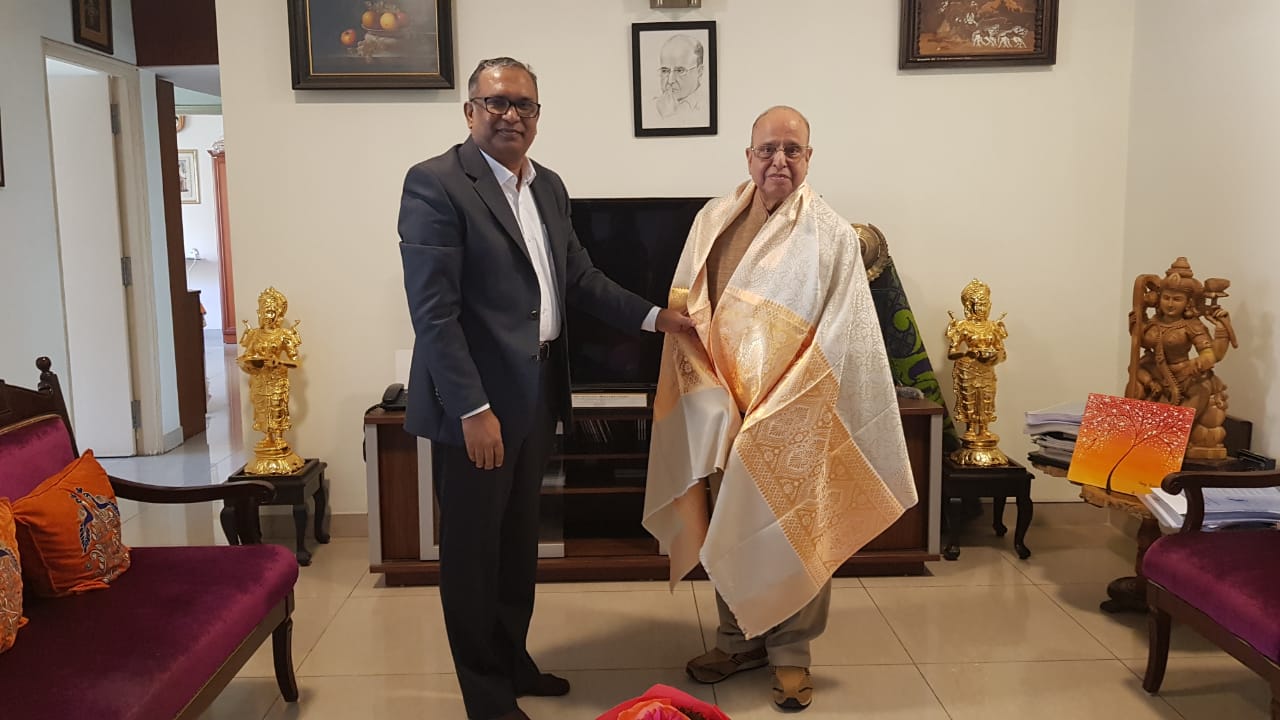