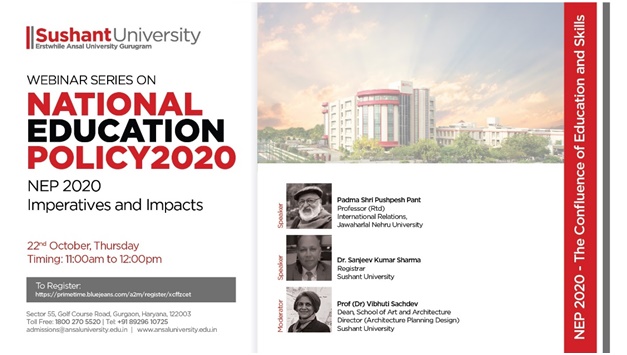 “It Is Your Skill That Gets You the Job, Not Your Degree”

This was the ultimate webinar in the series of webinars under the umbrella of Confluence of Education and Skills, which was conducted on Thursday, October 22, 2020 elaborating upon the subject of Imperatives and Impacts.

Dr. Vibhuti Sachdev, dean, Sushant School of Art and Architecture initiated the webinar by elucidating about the thin line of difference being construed amongst the Multi-Disciplinary, Inter-Disciplinary, Trans-Disciplinary and intra disciplinary terminologies. “All disciplines are forged from the standpoint of but one discipline. So how can one be a multi-disciplined person is the question which needs to be addressed”

Prof. Pushpesh Pant – a specialist in International Relations, a food critic and a historian who delivered the keynote address spoke about a few intriguing aspects of NEP by way of glorifying the elements of the NEP and the scope that they would have in the Indian context, especially by virtue of the country having a large chunk of population being under the age of 30.

The two significant factors he cited were that the Ministry of Human Resources Development was now being named as the Ministry of Education and that in the new NEP there were several exciting giveaways and takeaways.

The introduction of the use of mother tongue as the mode of instruction at the primary level of education was greatly appreciated by him who commented, “If the Chinese, the Koreans, the Japanese and the Arabs were successfully doing it, why can’t we do it as well?”

The existence of several governing bodies with regard to law, medicine, architecture and technology having their own individual (compartmented) policies of recognition and de-recognition and not having standard norms was a matter of concern raised by Mr. Pant.

“There should be more emphasis on making people job ready rather than seeing that they acquire degrees which, in the new approach, appear to be redundant. “It is your skill that gets you the job, not your degree” he commented. He was happy about the new revolution having been set up by the online learning system and he did not see any harm in the fact that a student was being given to submit his answer sheet even after directly consulting his books and notes.

He expressed apprehension about the future of the Indian Universities of excellence, which have invested huge sums of finances and capital once the foreign universities would be allowed to set up institutions in India. He said this needs to be debated before any firm decision is taken in this regard.

Dr. Vibhuti Sachdev, once having thanked Prof Pant for his valuable views, summed up in gist the outcome of the previous webinars that had been conducted under the theme of Confluence of Education and Skills by saying “Education is not merely a ‘ticket to a job’ it is a pause in your life which prepares you for action and takes you further on as a responsible citizen” she commented that even though the students were preparing themselves to go abroad, they have been short-chained due the fear of the pandemic. Notwithstanding the cost that one incurs in wanting to acquire a degree in a foreign land, it gives you the valuable exposure allowing you the vision to look at yourselves differently. “If we remove the foreignness of a foreign degree, it is bound to lose its value.” She said.

Dr. Sanjeev Sharma, Registrar, Sushant University in his final address said that the development of a society is directly proportionate to the level of education of a country as education teaches us to live in harmony with life. Our demographic advantage of having the maximum number of younger people can be harnessed with imparting skills which are relevant to knowledge. “The new NEP has reduced the gap between the source and the learner and is prompting our country to be self-reliant and is amplifying our global competitiveness.

“Technology has given a precious scope for adult learning. The digital content that we have prepared during these difficult times is always going to be with us.” He said. He lauded greatly the creation and the establishment of the Credit Bank system for students and valued deeply the Multiple Entry and Exit System, which, besides solving many problems for students, will make them multi-disciplinary and multi-skilled.

The setting up on the Higher Education Council of India which would have different verticals – a Regulatory Commission (for regulation), General Education Council (for standards,) Higher Education Grants Council (for funding) besides the NAAC for accreditation being set up within the same framework would automatically give rise to a lot of transparencies. This will also help streamline and synchronize the conduct of examinations by various institutions and bodies, thereby having the students save a lot of time and money.

Talking about the establishment of foreign universities in India, Dr. Sharma said that foreign universities would automatically lead to the creation of competition and competition is what actually breeds quality. The feature of the new NEP which allows liberty of designing the various curricula independently is a major positive step. This also has the provision of incentivizing the good teachers and penalizing the non-performers. The NEP by means of introducing the mother tongue as a medium of instruction is building a logical system right from the foundation stage of primary education, which is a matter of great thankfulness.

We are all educated but how much have we done to utilize our education still remains to be seen. Setting up of gender inclusion fund, or establishment of special education zones for disadvantaged regions and groups and the implementation of National professional standards for teachers and the creation of State Schools Standards Authority are very laudable steps by the Government.

At the end of his speech, however, Dr. Sharma said. “Whatever you may say, the key to success is implementation and only implementation”